How STRATAA surveyed 300K people for a multisite study

Susan Tonks is the Typhoid Strategic Award Programme Manager at University of Oxford. She is responsible for coordination and delivery of a 24-month programme of typhoid surveillance at sites in Africa and Asia. In this guest post, Susan describes her team's work using ODK to collect data on more than 300,000 individuals in Bangladesh, Nepal, and Malawi to support the programme.

The true burden of typhoid disease worldwide is essentially unknown due to a lack of effective diagnostics and field-based evidence. It is estimated that invasive infection by faeco-oral (stool to mouth) transmission of Salmonella enterica serovar Typhi and Paratyphi A account for at least 21 million febrile (fever related) illness episodes worldwide each year.

The Strategic Typhoid alliance across Africa and Asia (STRATAA) consortium is made up of prominent researchers affiliated with eight institutes spanning seven countries. We are engaged with national and local stakeholders to maximise the impact of the programme of research and our goal is to provide the evidence to support the implementation of new vaccines for the control of typhoid in different settings in Africa and Asia.

Before we began work, mathematical models were used to identify key factors required to optimise the understanding of transmission and vaccine-impact dynamics such as the rate of illness, how much natural immunity is present, the frequency of subclinical infection and the role of chronic carriers. Our high-level aim is to gather evidence to characterise the burden of typhoid at three urban sites in Africa and Asia.

In spring 2016, geographically demarcated areas were selected in three distinct areas (Dhaka, Bangladesh; Kathmandu, Nepal and Blantyre, Malawi) and a census carried out over a 4-month period visiting approximately 20,000 households per site to collect information on more than 100,000 individuals (a total of 300,000 across the sites).

Data are kept up to date by revisiting all the households every 6 months for 2 years and recording births, deaths and movement of people. These populations are considered as the cohorts from whom all other study components recruit.

To assess how many typhoid cases there are in the areas, a programme of surveillance is underway at designated healthcare centres associated with the census zones at each site. All patients attending the healthcare centres with a history of fever of more than 3 days or a fever of more than 38.5 degrees C at presentation are recorded and those resident in the census are followed up for between one and twelve months depending on various parameters which might indicate chronic carriage. For those resident in the census area, household contacts are also enrolled to assess spread within families.

It is known that in settings such as these, not all those with suspected typhoid attend healthcare facilities for several reasons, including distance from home and cost of treatment. Antibiotics are readily available at pharmacies and this may also have an impact on the numbers attending clinics. We are therefore running a healthcare utilisation survey to find out where people went if they have been ill and where they would go if they have not providing actual and hypothetical data. This has been timed to coincide with two peak typhoid seasons at each site over the course of the two-year data collection period. The questionnaire also asks for information about sanitation and hygiene.

Some people who develop typhoid go on to carry and shed the bacterium into the environment through faeces. As well as monitoring the number of cases in the populations through surveillance of the health centres, we are also assessing the impact of these carriers on the spread of the disease by collecting relevant samples at designated time points from a selection of people of different age ranges resident within the census areas. As with the hospital survey, if a resident is suspected of being a chronic carrier, their household contacts will also be asked to provide samples to assess their impact on those living near. 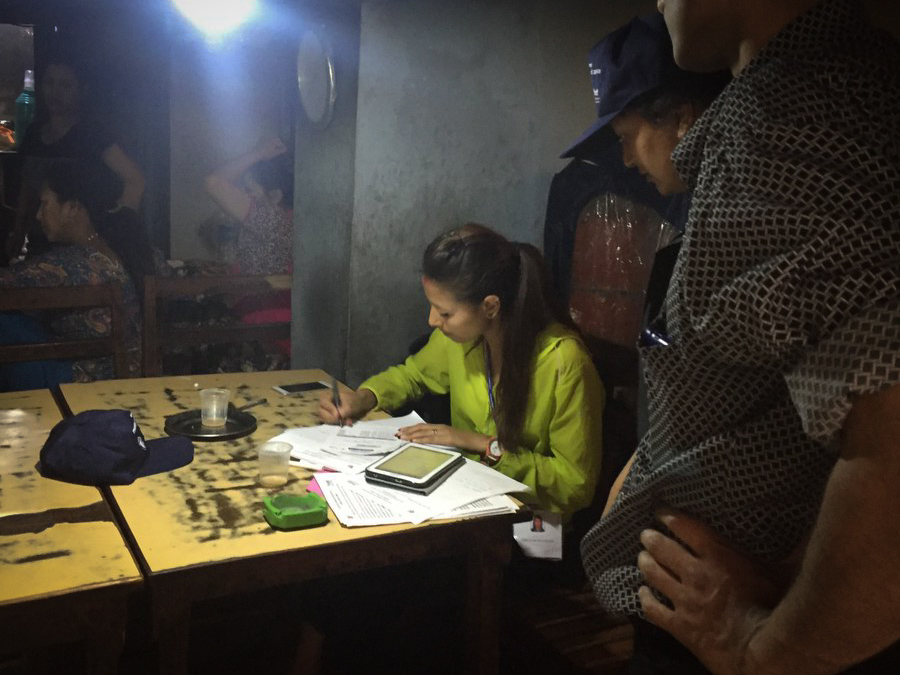 To simplify data collection for the numbers involved and ensure consistency across all the sites we took the opportunity to utilise mobile technology. The open data source Open Data Kit (ODK) system provided the capability and Nafundi helped us implement ODK by guiding our team through a data capture process that ensures our staff can collect data quickly, accurately, securely, and at scale.

We developed the original forms as Word documents and Nafundi converted them to electronic ODK forms. Each site performed test runs for each form until all stakeholders agreed on the content and ease of use. The live forms were then uploaded to the devices for use in the field.

Field workers return to base each day and data are uploaded over Wi-Fi or the cell network to onsite servers which Nafundi manages remotely. Onsite servers ensure that each site has control and ownership of its data. To facilitate analysis and reporting across all sites, site data is automatically exported, anonymized, and securely transferred to a central independent server every evening using software Nafundi created for STRATAA.

With Nafundi's help, data collection forms for the census, census updates, health utilisation survey and the serosurvey (chronic carriers) have been successfully developed and deployed at all sites.

Those carrying out the data collection vary greatly in familiarity with electronic data collection and the Android devices used, but all the collections to date have been very efficient. For example, information on 311,204 individuals from 74,188 households in the three countries was collected within an average of 14.7 weeks (range 13-16) by 20, 25, and 37 enumerators from Malawi, Bangladesh, and Nepal respectively. Automated, real-time upload of accurate data was crucial in order to deliver the initial census on time and allow the future components to commence.

Since January 2016, Nafundi has helped us stay on track with a complex and involved programme of data collection. Their response times for questions and creative solutions have been particularly impressive and that is why STRATAA will continue to depend on Nafundi for the remainder of the two-year fieldwork data collection.

We expect to have completed more than 850,000 questionnaires when the fieldwork finishes and we are thrilled that we can contribute evidence to support the implementation of new vaccines for the control of typhoid globally.